The next thing I looked at was the tacho drive, this is a worm style gear and runs at 90 degrees against the corresponding gear on the end of the idler shaft. 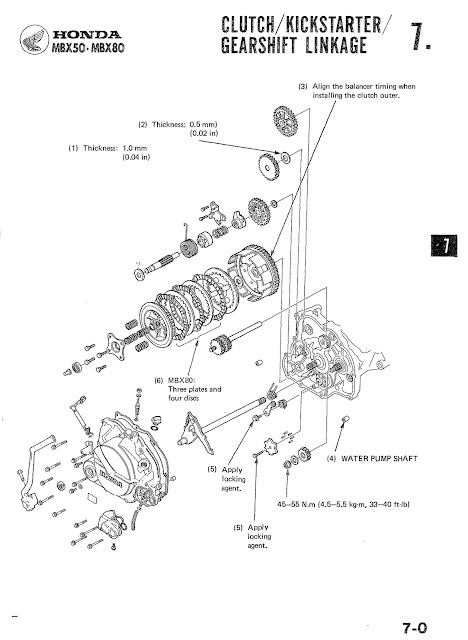 The tacho gear seemed to have an excessive amount of vertical play, suggesting the noise could be this gear vibrating up and down? The gear has an upper and lower washer, which the manual highlights to remember to reinstall and an oil seal, which was super hard.

As a test I rebuilt the side case and refilled the fluids without the gear, I cut a rubber finger of my workshop gloves to cover the tacho gear drive hole just in case something went in the motor or oil came out.

I have compiled some clips with various stages to focus on what was the rattle or what is just standard engine noise. I also recorded my MB8 for an engine noise comparison but I didn't include that in the vid, so just MBX.

When I originally bought my bike it had an annoying engine rattle, I actually just put it down to an old bike and maybe a little end bearing?

I wanted the engine fully re-built with a re-bore and this was done via our friends at the M Shop. While the engine was away it had all new bearings and seals as well as the piston, clutch, carb and external finishing.

When the bike was built and the engine in you can here the engine is smooth, but 'the noise' was still there.

At this point I was not concerned until the kick starter shaft snapped and it got my thinking about replacing any suspected gears and cogs that might cause the rattle. Read about that here

After that rebuild I anxiously started the bike and the rattle was still there, again I parked it up and thought I would do some more investigating in the new year.

At this point I thought I would speak to the M Shop to quiz them to what they thought was the issue, I'll add I was not implying or blaming them for the continued noise as it was there before re-build and was something weird and not covered by the engine rebuild. The M Shop were as usual very helpful and gave me a few suggestions to look and even offered to have the motor back.

So the bike came apart again...

So the first thing is the water pump bush is broken and the M shop advised to look at the shat and teeth of the idler shaft. I ordered in the replacement bushing and managed to borrow a idler and water pump shaft just to check and eliminate.

With the bike re-built and started the noise was still there....