The MBX80 was produced to fit the needs of the licencing laws of multiple county's in the 1980's, where riders were restricted to a certain capacity. In the UK learners were restricted to machines up to 125cc and 12hp, the unrestricted 11hp MBX80 offered close to the same performance of the bigger restricted 125's but benefited from a free revving engine in a light-weight chassis and a lower insurance premium making it attractive to young riders. Honda also recognised that 16-18 year old's would benefit from a larger chassis compared to the out-going MB-8 model and also its main competition of the Kawaskai AR80 and Yamaha RD80LC. The sales literature at the time had Honda claiming a 'full sized frame', I wouldn't go that far but it certainly was a better fit if you were taller.


Specification wise Honda had the competition beat with a liquid cooled single cylinder 2 stroke engine with reed valve, 12 volt electrics and an engine balance shaft to smooth out vibration. Suspension was in the form of Honda's 'Pro Link' mono shock and front braking via a twin front hydraulic disc. Adding a handle bar fairing and belly pan completed the picture giving the looks and feel of a lot larger bike. The downside to this was the Honda was a much more expensive bike at £699 compared to the AR80 at £529, RD80LC at £646 and RD80MX at £557 (prices 1983).

The FWD-D was the UK models specific code and was unique in the fact that it has the duel disc brake up front opposed to the single disc Euro model (SWD-D). As well as the twin disc's this model has two single piston sliding calipers and a lever master cylinder to match. Lastly the UK specific bike was only available in Black or White in the first generation colours, although there have been some reports of a few 2 gen colours (the 'rainbow' models) with twin discs being sold in the UK which I had confirmed by a Honda dealer.

Here is what Honda said....

The highest specification yet on an 80cc machine.
Honda’s MBX 80 offers similar performance to that of restricted 125’s, but provides economies in running costs and insurance, especially for the young enthusiast. Add to that big bike style, size and feel, and you know you’re riding a winner.

Liquid cooled, high performance engine.
Packed with innovations and race proven high technology, this power-house supplies maximum output any time, all the time. Extremes of temperature make not the slightest difference to the even high output thanks to pressure fed liquid cooling. Efficient exhaust port, CD ignition and a vibration-reducing balancer keep it running as sweet as a nut.

Big Bike size and style.
The full-size frame and wheels are perfectly complemented by sleekly styled, flow-though tank, side cover and rear tailpiece. Full instrumentation is enclosed within an aerodynamic bikini fairing and the under cowling completes the fully integrated design. There’s a big bike feel as well as big bike looks, helped by no maintenance ComStar wheels. 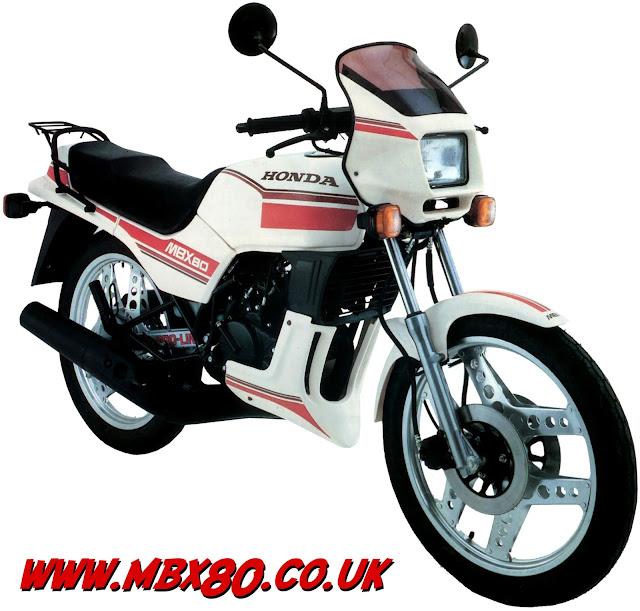