With the new faring mount fitted the nose fairing went on. The fairing is NOS and has turned a little yellow over the years, so I will t-cut it to try and bring it back, if I can't bring the colour back it might have to come off for painting.
This is another landmark moment as for the first time in this whole process the bike is 100% complete and working! There are several niggles to resolve like correct bolts and warning labels, but here it is. 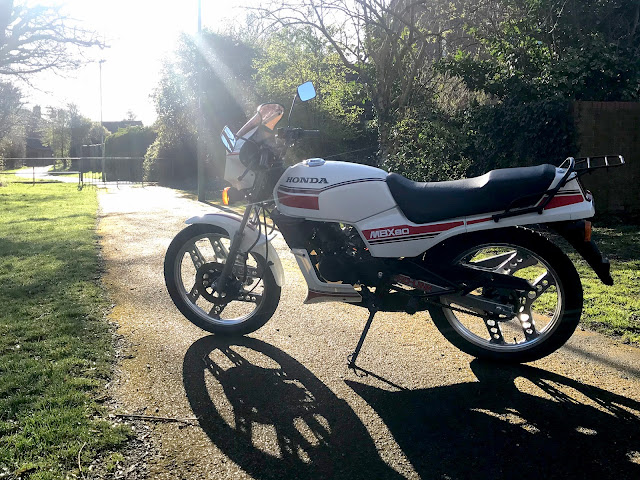 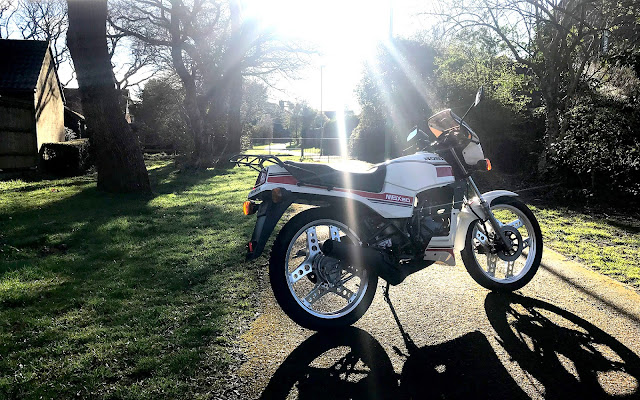 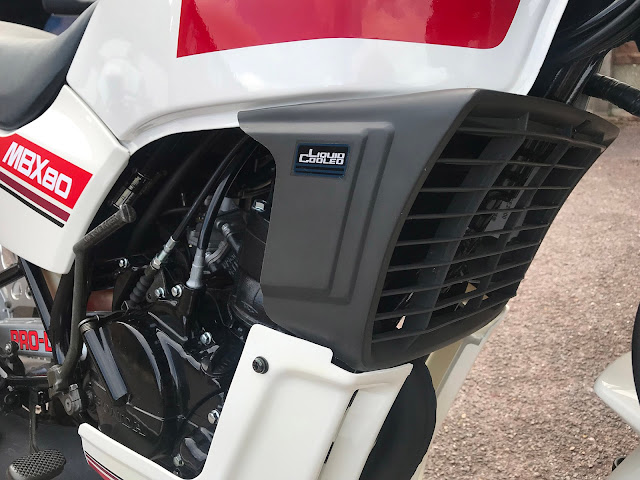 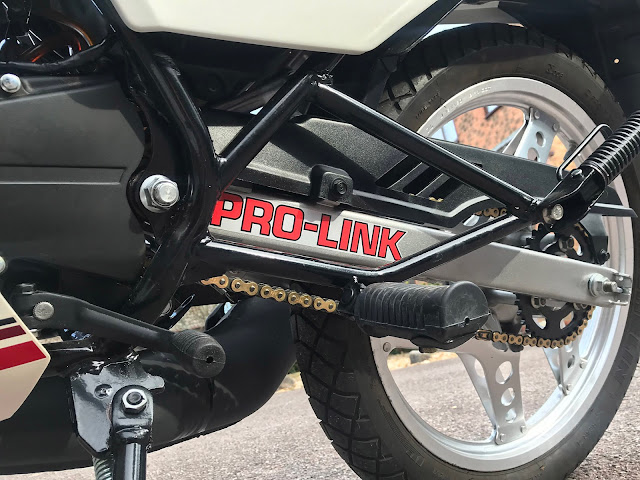 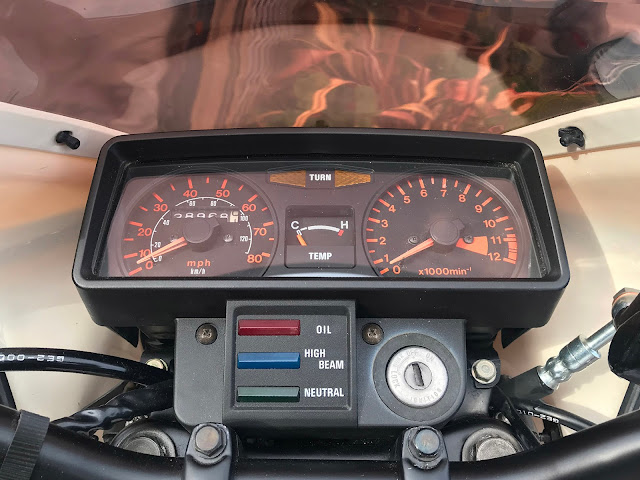 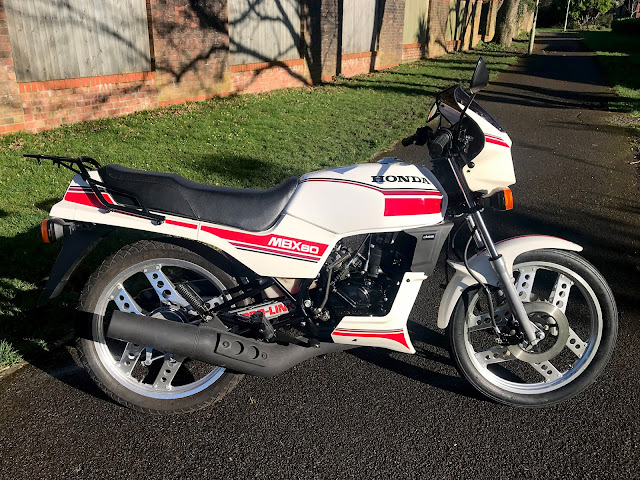 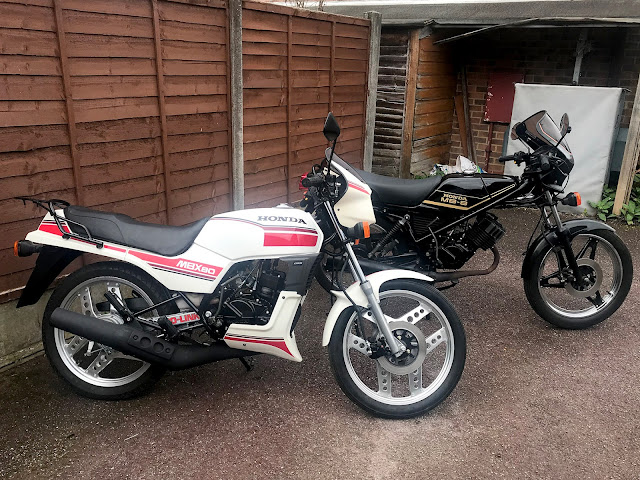 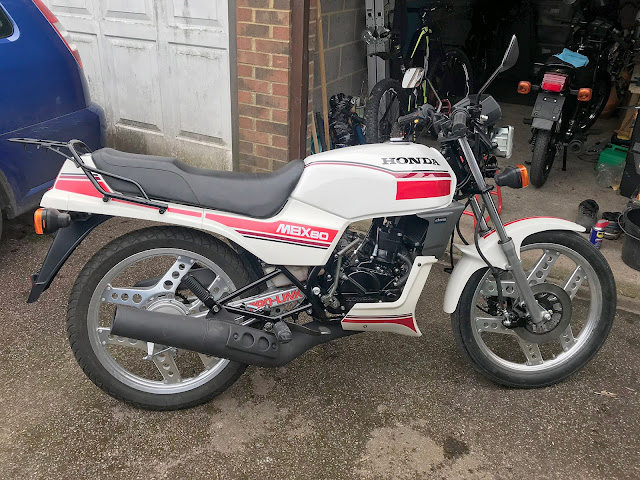 The next job was to fit the handlebar fairing bracket and fairing, unfortunately for some reason the lower mount did not line up with the fairing so would not fit. A search on ebay found a NOS bracket with the correct lower mount so that was ordered as a replacement.
at March 18, 2019 No comments:

this is a retrospective post as I did this job a couple off weeks back and forgot to post!

One of the most important jobs is bleed the oil pump and set the correct cable movement to that the throttle delivers the correct amount of oil with the fuel.

To set the cable you need to make sure the marks line up when the throttle is fully open, Honda say + or - 1mm on the tolerance of this, but its quite simple to get this spot on. 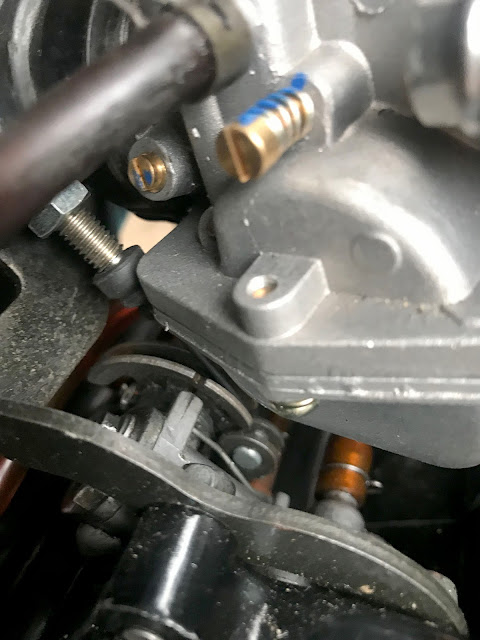 Next was to get some two stroke oil in the reservoir and bleed the pump. There is a 7mm nut on the top of the oil pump (the middle one) which needs loosening to expel any air. Access is very tight here and it helps to remove the airbox. I found gravity was not enough to get oil though the system so I actually pressurised the oil reservoir to force oil down the lines, through the pump and out the bleed screw. This sounds highly technical, but I just stuck my mouth on the filling neck of the res and blew hard! 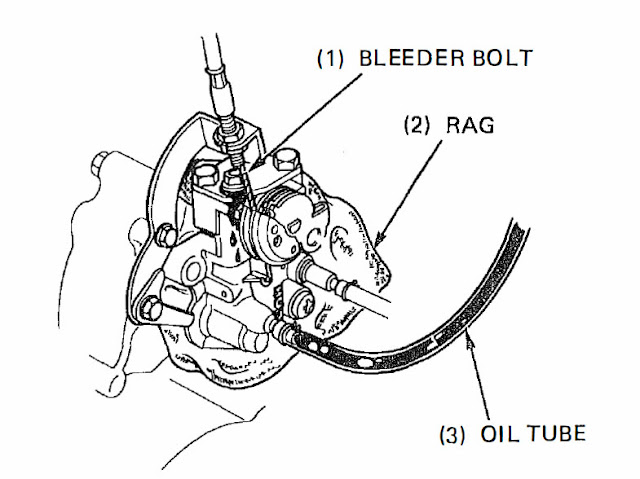 Next there is a second oil line which runs from the pump called the bypass line, this one I just bleed with a syringe. 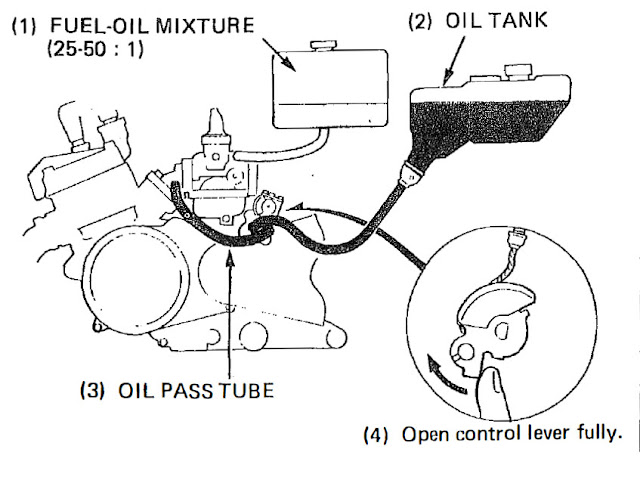 **** Even after bleeding both parts the Honda manual recommends you add oil to the fuel (25-50 parts fuel to 1 oil) when you first run with the pump fully open.

""Made sure that there is fuel in the fuel tank (25-50 parts fuel to 1 part lubricant). Start the engine and run it for about 10 minutes with the oil pump control lever in the fully open position so as to force air out of the oil pass tube with the oil."" Page 2-7

This week I started by bleeding the front brake system with DOT 4, filled the cooling system and filled the gearbox with oil (0.9l).

With the brakes, to save mess (DOT 4 is highly corrosive) I used a hose and a syringe on the caliper bleeding nipple, when the syringe fills you can just re-cycle the fluid back in to its container. You also need a clear hose so you can see any air bubbles that come out. For those who have never bleed a brake before its quite simple.
1/ fill reservoir and pump lever.
2/ pull and hold brake lever
3/ open bleed nipple (8mm spanner)
4/ close bleed nipple
5/ pump lever as this re-fills the lever piston.
6/ repeat until no bubbles come out of the bleed hose and the lever firms up.

*** you can reverse step 2 and 3 (it doesn't matter) but you have to close the bleed nipple before releasing the lever or it will suck the expelled air back in. 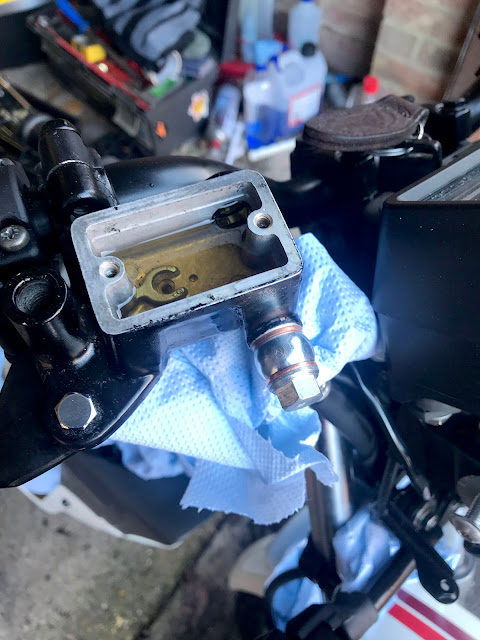 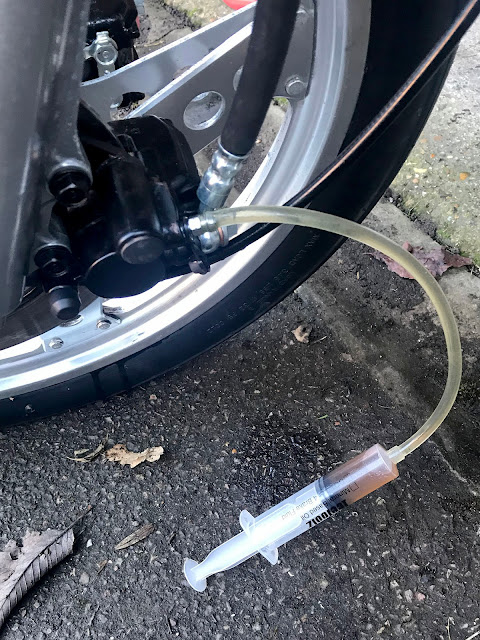 Next I fitted the fuel tap and filler cap to the fuel tank, fitted the tank mounting rubbers and re-fitted the fuel tank, side panels and seat. Unfortunately I don't have a fuel hose otherwise I would of ran the bike, so this will have to wait another week. Running the bike is also important to properly circulate the coolant, which needs to be re-checked after. 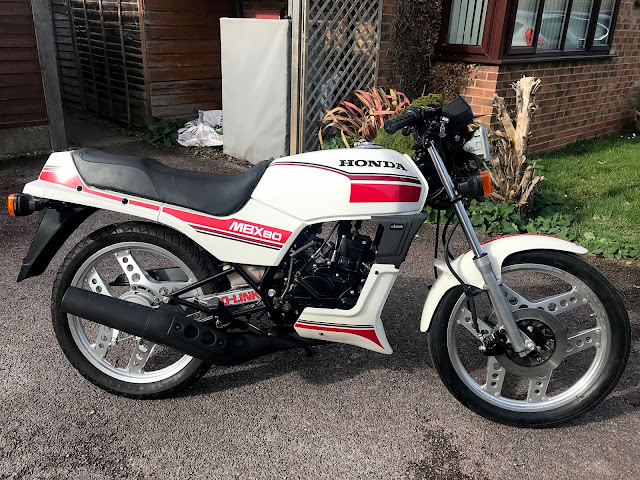