My Bike: Restoration, it starts...

Over the past year I have been collecting NOS parts (I have more goodies on the way), but now is the time for the actual restoration to start. 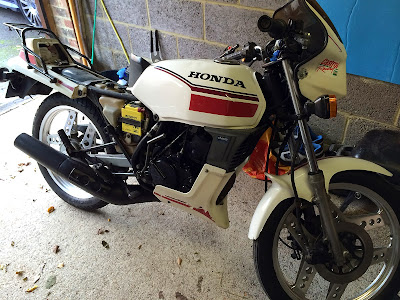 The first task is to strip the bike to the bare frame so this can be powder coated, the strip down was rather uneventfully. Expecting the worse, after all it is a29 year old motorcycle, the only real problem area were the nut and bolts that hold the rear mudguard on. The lower nut sits under a cover (for weather protection) but just spins. The bolts that hold the bracket that located the rear of the seat were also sized, and after a fight snapped, so out of the whole bike one snapped bike was very pleasing!

The other things that were apparent was just how much rust was on the lower front of the frame, however nothing that can be cleaned and treated. This cannot be said for the exhaust, the rot on the down pipe is so extensive I don’t want the headache of trying to fix it….

This weeks job is going to be the front fork, to be continued...