I got a nice surprise this morning when I got my very first e-mail relating to this site!
A chap called Martyn Butler mailed me in this fantastic restoration on a white UK spec MBX with just 7000 miles on the clock. Martyn has fitted a Gianelli performance exhaust for a deeper more sporty sound but also has a new stock exhaust for originality. Here is what Martyn said:

Hi, thought I would share its story some more and hope the site grows for these great little bikes. 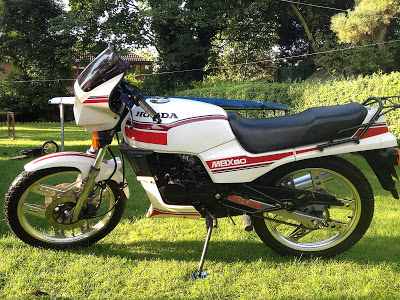 The bike was purchased from e-bay in march this year, it was a 9 hour round trip but just had to buy it, it had 2 owners from new with tool kit, books and Honda keys. I had been looking for 2 years but only came across either the fabled Padgetts bikes (found in a crate) or very poor examples, this was last on the road in 1996 and had been stored since without being run. 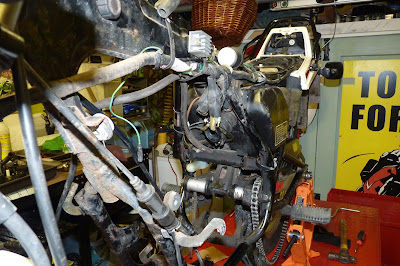 The first pic shows the mess that was the frame, but it was all standard and not a thing was missing, the toolkit was like new and do not even think it had been used. Upon getting it running it was obvious the bike needed a full strip and to do it right I thought mains, piston, seals and the works – a note of interest was the bore was standard and could have been re-ringed if necessary. The biggest problem was the condition of the carb and I could not get any internals for it, so after much searching took a punt on a NSR80 one, which looked exactly the same but had a smaller main jet, upon fitting this the bike ran very well and with a few minor adjustments and the odd plug chop seemed ok, but very slow! So on with the Gianelli! Which was found after a lot of searching in Germany. 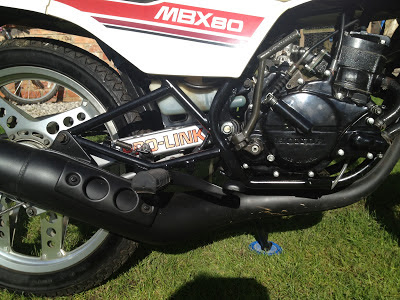 But as a rule with strokers, throwing parts only at it is not wise and Jetting became a real issue with a very narrow band, high in the rev range but after many changes / needle settings it worked and sounds crisp and responds as it should, I do not intend to do many miles but it will be T&T and used.

Key to restoring one of these is MS Word translator for all the German stuff (very helpful).
Never, never buy a pattern tank cap – total waste of money / loads on e-bay but waste of £20 – buy genuine! And be patient as many parts are available, RS paints the only place ever to get paint / whatever the bike.

I have owned an RD80LC and it is not a patch on the MBX for ride, power or reliability also no 12v electrics!